Some of us might remember Zabaglione from a time when it was a staple of the dessert trolley in Italian restaurants lit by chianti candlelight. But, zabaglione is an ancient Venetian speciality, with its roots in the warming eggnogs common throughout medieval Europe, simply flavoured in France and Italy, highly spiced in England.  Zabaglione was originally served as a tonic, stirred into morning coffee or alternatively, served as a dessert-cum-digestif after dinner. A glorious cloud of pure pleasure that you can whip up in less than 10 minutes. 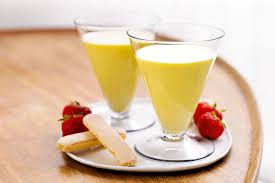 Find a heatproof bowl that will sit over, but not touch, a pan of simmering water, and put that water on to boil.  Put the egg yolks and sugar in the bowl and whisk until thick and creamy. Gradually beat in the alcohol and salt, then set the bowl over the pan and continue to whisk, scraping the base of the bowl as you go, until the whisk leaves an impression in the mixture and, when lifted up, drops a fairly solid ribbon trail on the surface of the mixture.
Remove the bowl from the pan and put on a cool surface. Keep whisking for another couple of minutes, then divide between bowls and serve with a grating of nutmeg on top.
Zinfandel 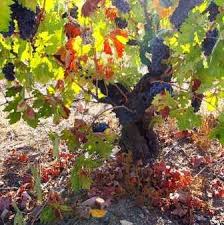 The story of Zinfandel is like a romantic thriller, a mystery over the last 30 years and solved only a very few years ago.

By the middle of the 19th century a vine variously called Zinfandel and Zinfandal had established itself in northern California and was prized for its productivity.  It thrived in the warm climate, was beloved by the thousands who shipped grapes east from California to make wine at home during Prohibition, and, at the time, was the most planted dark-skinned grape variety of the West Coast.

It was the fact that no relationship could be found with any known French variety, and there was therefore no reference to it in France’s well-kept and documented vine collections, that kept Zinfandel’s origins shrouded in mystery for a century and a half. It was left to historians rather than scientists to try to re-trace the path by which this popular variety made its way to California.

The most dogged of them, Charles L Sullivan, worked out by pouring over old catalogues and nurserymen’s records that the vine had been imported to the American east coast in the late 1820s from the Austrian imperial nursery in Vienna. It was then taken to Boston and by the 1830s was quite widely grown under glass as a table grape in New England. It seems as though the variety was included in an early shipment of vine cuttings to the hundreds of prospectors who rushed out to California in search of gold in 1849 and had to turn to farming instead. Sullivan found a connection with a vine known as Black St Peters in New England but couldn’t work out how Black St Peters found its way across the Atlantic. 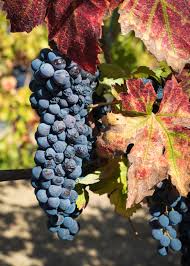 The next significant chapter in the unravelling of the mystery came in the early 1990s when, once DNA profiling had been applied to analysing the genetic relationships between different vine varieties, it was established beyond doubt that Zinfandel was, intriguingly but inexplicably, identical to a then-obscure grape variety called Primitivo grown on the heel of Italy. Theories were advanced for how this could be.

The breakthrough came when it was established that Zinfandel/Primitivo had to be a parent of the Croatian variety Plavac Mali.  The other parent turned out to be a much more obscure Croatian variety, which led researchers to the conclusion that Zinfandel/Primitivo had to be Croatian in origin too. Eventually, after many a trek through the vineyards of the beautiful Dalmatian coast and its rocky islands, the doppelgänger was found. Croatian viticultural researchers, discovered an ancient and almost extinct variety on the island of Kaštela near Split called Crljenak Kastelanski (literally “red grape of Kaštela”) that did indeed prove to be identical to Zinfandel.

Beside Cabernet, Zinfandel was regarded as a sort of home-grown weed, good enough for the common man if cheap enough, but incapable, unlike the fashionable and aristocratic Cabernet Sauvignon, of producing fine wine.

The only saving grace for the reputation of ‘Zin’ was in some extraordinary port-like essences made from some of the oldest vines in the state left virtually untended during Prohibition in the old mining country of the Sierras east of the Central Valley. Most of these wines were labelled Late Harvest Zinfandel and regarded as freaks in the 1970s because they reached natural alcohol levels in excess of 15%. 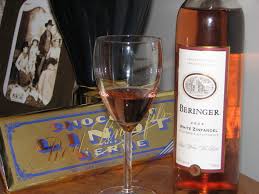 Zin’s stock slumped and there seemed nothing useful to be done with the thousands of acres planted except bleed as much lowly, thin red from them and blend them with more prestigious grape varieties, or sell them as cheap Hearty Burgundy and the like.

Then in the 1970s the white wine boom kicked in with a vengeance and someone had the bright idea of bleaching most of the colour of red Zinfandel, or bleeding the juice off the skins as fast as possible, and ‘White’ (actually pale pink) Zinfandel was born.

By the end of the 20th century White Zinfandel’s fortunes had firmly waned and most Americans now realise that Zinfandel can and should be a red wine. But what sort of wine? Unless it is severely pruned, it tends to yield too many grapes to make concentrated wine and Zin’s other problem is uneven ripening.

The best California Zinfandel tends to be grown from very carefully tended old vines grown in the Sierras or in Dry Creek Valley although there are pockets of great vines elsewhere. So high is Zinfandel’s profile in California that it is planted in many other warmer wine regions in the USA as well as in South America, South Africa and Australia, all of which have a warm enough climate for it to ripen fully.
Zucchini 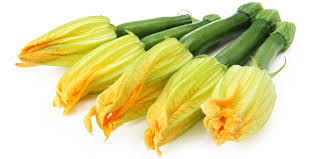 Zucchini, also known as courgette, is a summer squash in the Cucurbitaceae plant family, alongside melons, spaghetti squash, and cucumbers.  It can grow to more than 3.2 feet (1 meter) in length but is usually harvested when still immature — typically measuring under 8 inches (20 cm).

Although zucchini is often considered a vegetable, it is botanically classified as a fruit.  You may be used to seeing a vegetable that’s green and speckled, but there’s a yellow variety of zucchini, and it’s easy to confuse with yellow squash, a different type. The easiest way to tell the difference is to look at the shape. Yellow squash usually has a tapered neck, either crooked or straight, whereas zucchini of any color looks like a cylinder from end to end. Though not much is known about the difference between the varieties, some say golden zucchini has a sweeter flavor than the green kind. Because it retains its color after cooking, it also makes a sunny addition to any dish. 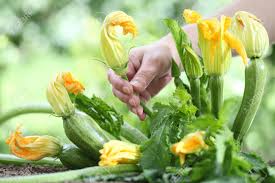 While squashes originated in the Americas, this particular variety was first developed in the early 1800s in Italy,  Zucchini has been used in folk medicine to treat colds, aches, and various health conditions. However, not all of its uses are backed by science.

Italians are thought to have bred modern zucchini from the squash they picked up in colonial America. “Zucca” is actually the Italian word for squash. That’s why you’ll see zucchini referred to as “Italian squash” in some recipes. Still, summer squash has been around for quite some time. The crop dates back to 5500 B.C. where it was integral in the diets of people living in Central America and South America, according to the University of Arizona Cooperative Extension. (And if you’re in Europe, it may appear on menus as “courgette.”)