Christopher Columbus and His Four Voyages 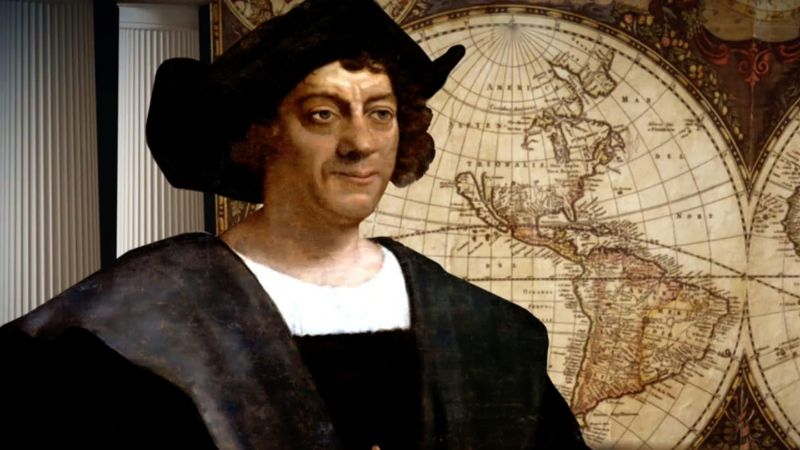 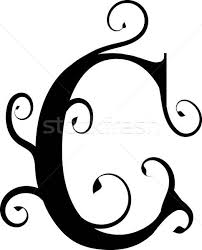 Christopher Columbus is the explorer who is credited for discovering America. Of course, there were already people living in America at the time who we call Native Americans. There even was a European, Leif Ericsson, who had been to the Americas before. However, it was Columbus’ voyage that started the exploration and colonisation of the Americas.

Before the Voyage
Columbus was born in Genoa, Italy in 1451. He later lived in Lisbon where he worked as a trader. He learned how to make maps and navigate a ship. A Shortcut to China
Columbus and his brother, Bartholomew, knew that there were great riches to be had in China and East Asia. However, travelling overland by the Silk Road was dangerous and a sea route around Africa seemed much too long. Columbus thought he could sail straight to China by crossing the Atlantic Ocean.
It would turn out that Columbus was wrong. The Earth was much larger than he thought and there was another land, the Americas, between Europe and Asia. Three Ships and a Long Voyage
Columbus spent years trying to convince someone to pay for his voyage. He first tried to get King John II of Portugal to pay for his journey, but the King was not interested. Finally, he was able to convince Queen Isabella and King Ferdinand of Spain to pay for the trip.
He set sail on August 3, 1492 with three ships named the Nina, the Pinta, and the Santa Maria. The voyage was long and difficult. At one point his men threatened to mutiny and wanted to turn back. Columbus promised them he would turn back in two days if they didn’t find land. In his journal, however, he wrote that he had no intention of turning back. Finding Land 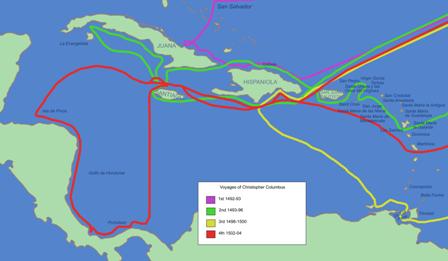 On October 12, 1492 land was spotted. It was a small island in the Bahamas that Columbus would name San Salvador. He met natives there that he called Indians because he was convinced that he had landed on islands off the coast of East Asia. He also visited other islands in the Caribbean such as Cuba and Hispaniola.
The map shows the routes taken by Columbus on his four voyages

Returning Home
After making his discovery, Columbus was eager to return home to Spain and claim his riches. Only the Pinta and the Nina were able to return to Spain, however, as the Santa Maria wrecked off the coast of Hispaniola. Columbus left 43 men behind on the island to start up an outpost. Upon returning home, Columbus was treated like a hero. He presented some of the things he had found including turkeys, pineapples, and some natives he had captured. The King of Spain was pleased enough to fund future expeditions. More Voyages
Columbus would make three more voyages to the Americas. He explored more of the Caribbean and even saw mainland America. He had some difficulties in being the local governor and was even arrested for his behaviour and for mistreating some of the colonists. Columbus died on May 20, 1506. He died thinking he had discovered a shortcut to Asia across the Atlantic Ocean. He never knew what an amazing discovery he had made. Fun Facts about Christopher Columbus