We are delighted to introduce you to Celestyal Cruise’s brand new flagship, the Celestyal Experience.  Take advantage of our Book Now, Pay Later Option and reserve your cabin and dialysis place onboard.

Features include four restaurants, seven bars and lounges, two pools, two jacuzzis, a beach club, sundeck and jogging track. The ship also has nightly entertainment with a casino and a library, meeting rooms and onboard boutiques. 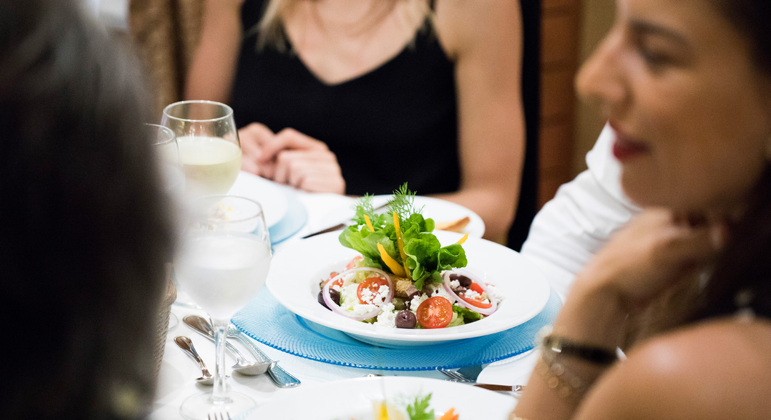 Greeks have a penchant for generosity and fine cuisine and as ambassadors of hospitality, Celestyal Experience’s amiable staff welcome you onboard to indulge in authentic recipes, premium beers, fine wines and selected spirits.

With the all-inclusive drinks package, wholesome meals three times a day, a full program of entertainment, and excellent amenities, life onboard has everything you could wish for.

During your time with Celestyal, your stateroom Steward will provide room service and a handpicked selection of included shore excursions ensure you see the most iconic archaeological sites without having to pay additional fees.

Suite and Wellness class guests are granted exclusive access to the onboard beach club – as tranquil and classy as any chill-beach club in Greece.

The adults-only area allows you to relax in premium comfort, laze around the pool, shade in a private cabana and soak up the beguiling panoramic views of the Greek Isles.

personal service to match.  Almost all of the comfortable staterooms have a private balcony where you can kick back and relax and enjoy ocean views or gaze at the stars.

The six Grand Suites boast large terraces where you can enjoy breakfast served by your personnel concierge. Fresh towels and toiletries are provided twice a day and amenities are provided including adjustable air-conditioning, hairdryer, security box, TV and refrigerated minibar.

With seven ambient bars and lounges aboard the Celestyal Experience, you have the option to choose whilst you sip the complimentary drinks and selected wines.  Relax as you watch the sunset

over pristine landscapes, mingle with other guests or enjoy the romance of the glittery night sky.

The sumptuous tastes of the Mediterranean are the signature dining experience and there are extra-special delicacies for you aboard the Celestyal Experience.  The world-class chefs will tempt and delight you with a wide range of dishes from Greek grills, authentic wood-oven pizzas, healthy deli options and vegetarian dishes. There are also specialty dishes from the chef’s mouthwatering personal menu.

When you’re surrounded by the beauty and romance of the Greek Islands it is understandable that you may want to look and feel glamorous.  The onboard expert beauticians, hairdressers, manicurists and pedicurists will sprinkle you with a touch of magic.

Celestyal’s range of onboard services ensures you have access to everything you need.  Browse through the selection of shops for last-minute shopping and gift ideas, check-in back home using telephone or wi-fi and ask the professional photographer to capture your special moments.

You don’t have to venture to the restaurants to enjoy the delectable recipes abroad the Celestyal Experience.  Take advantage of room service and enjoy a romantic dinner or family meal in private.

In addition to the wide selection of all-inclusive menu, you also have the opportunity to upgrade your dining experience and sample the chef’s exclusive dishes for an additional fee.

The complimentary drinks package invites you to enjoy premium beers together with a solid selection of delicious wines and spirits.

Celestyal Experience is the only way to experience Greece in a few days.

The Epic Journey of St Paul

The epic journey of St Paul tells of many trials and tribulations.  His teachings inspired countless followers and were the inspiration behind The Temple of the Artemis in Ephesus – one of the seven wonders of the ancient world.  However, his journey also incited riots and the Apostle was forced to flee from angry merchants.  The Steps of St Paul cruise takes you on a mesmerising journey of your own and recounts fascinating insights into St Paul’s experiences along his journey – plus much more!  Discover the romance and mystery that surrounds the ancient worlds of Greece and Turkey, and visit iconic landmarks including Hagia Sophia, the Acropolis and the Holy Grotto of the Apocalypse.  For history buffs that love an adventure the Steps of St Paul is an enchanting experience that offers much more than a typical run-of-the-mill cruise.

Join  a visit to a biblical city! Travel by air conditioned coach from the port of Thessaloniki to the Citadel and Vlatadon Monastery, where St. Paul reached during his Second Missionary Journey. You will then leave Thessaloniki for a one-hour drive through the countryside to reach the city of Veria (called “Berroia” in the Bible), St. Paul’s next stop after Vlatadon – it was here that he preached to the city’s “noble Jews” – you will pay a visit to the traditional Tribune, where three in situ steps coexist with a recently finished mosaic of the Saint that commemorates this sermon. Today Veria is the capital of the regional unit of Imathia and the largest exporter of agricultural products in the region. It may have been inhabited as early as 1000 BC.   Paul is the patron saint of Veria, which was named for one of the daughters of the mythological King Veris. Established in the foothills of Mt. Vermion, fortified Veria flourished behind its massive walls. One of the first cities to surrender to the Romans, in 168 BC, it became the area’s second most important city after Thessaloniki. During the Byzantine era many small, delicate, frescoed churches were built in the city, which came to be known as “Small Jerusalem.”
You will visit one of these immaculate churches, the Church of Christ, which was built in the early 14th century and is home to masterworks by the most famous painter of the era, Kalliergis. Under the Ottomans, Veria was an important commercial and cultural center – it was during this period that many mosques, mansions and the old market were built.   There will be time to wander and explore and shop in this marvelous ancient city before we return to the harbor at Thessaloniki. With the Bosphorus Strait dividing two continents, Europe and Asia, this is one cruise that’s truly unique. You’ll set sail by private tender boat to glide over the jet blue waters of the Bosphorus so that you can take in the city and its iconic skyline from both angles. As you weave your way between traditional fishing boats and ferries, you’ll soon see the Orient and Occident emerging. Keep a lookout for the glamorous 19th century Dolmabahçe Palace and the former Ottoman palace of Çırağan, now a luxury hotel, on the European riverbank. And on the Asian side, the summer residence of the sultans, Beylerbeyi Palace, as well as the Anatolian Castle medieval fortress and magnificent Kanlica Villa all soon come into view.
Then, back on dry land, you can stretch your legs with a stroll around the labyrinthine Spice Market. Try haggling for souvenirs, or simply browse the myriad of goods on offer.

A spectacular day. Your first stop after leaving lovely Kusadasi is the House of the Virgin Mary on Mount Bulbul (“canary”). Prior to his crucifixion, Jesus Christ entrusted his mother to St. John the Evangelist, who took her to Ephesus and hid her in a hut at the foot of Mount Bulbul, where he brought her food and water every day. The Virgin lived here until the 101st year of her life, around 60 A.D. In 1957 the Vatican recognized the House of the Virgin Mary as the dwelling in which the Virgin spent the final years of her life, and for the last five-and-a-half decades it has been an important pilgrimage site for Christians and Muslims. There is a fountain here whose waters are said to be therapeutic.

You will then visit St. John the Evangelist’s Basilica, a cross-shaped chapel built in the 6th century by Emperor Justinian. Modeled after the now lost Church of the Holy Apostles in Constantinople, it was one of the most important Christian pilgrimage sites of the Middle Ages.

Your next stop is Ancient Ephesus, one of the 12 cities of Ionia. This is a stunning marvel in the hills above the Aegean coast, one of the world’s largest open-air archeological museums. Founded by the ancient Greeks circa 2000 BC, it was the wealthiest of the Ionian cities and one of the most important cultural centers in the Mediterranean. The city was dedicated to the goddess Artemis, and its Artemision, a temple in her honor, took 120 years to complete and was one of the Seven Wonders of the Ancient World. Ephesus later became the second-largest city in the Roman Empire, at one time home to a quarter-million people. It was the first and most significant city in the Roman province of Asia and one of its key ports.

Millennia ago the Aegean receded west, stranding the city on its sun-seared hillsides. It is believed Paul wrote his Letter to the Ephesians here. It was the most important Christian city between Rome and Antioch.   Ephesus is rivaled only by the Forum and the Acropolis as one of the most complete classical cities in Europe, even though only 13% of the city has been uncovered!

You can wander through the Odeon and the Prytaneion, then stroll between the marble colonnades of Curetes Street to visit Trajan’s Fountain, Hadrian’s Temple, the Scholastica Baths and the astonishing Terrace Houses. Nearby, where Curetes Street becomes Marble Street, is the spectacular Library of Celsus, which has been almost entirely reconstructed, and the Agora.

Every step here takes you deeper into the Hellenistic, Roman and early-Christian eras; you’ll notice inscriptions on many of the city’s columns. The Great Theater of Ephesus, where St. Paul once preached, was carved into the side of Mt. Pion in the 4th century BC. It held up to 24,000 spectators and is still renowned for its outstanding acoustics – even today it hosts concerts and other performances. to the ancient city of Miletus, near the coast, which was one of the greatest and wealthiest cities in the ancient Greek world. St. Paul stopped here on his Third Missionary Journey, on his way back to Jerusalem.

Miletus was located at the mouth of the River Meander, and its four harbors and strategic location made it an important port and commercial center. Miletus became the most important of the 12 cities of Ionia and was one of the first cities in the ancient world to mint coins – Homer mentions Miletus in The Iliad. The city’s fortunes declined, however, as the Meander silted up its harbor. There are many well-preserved ruins here, including a Temple of Apollo, a Byzantine church and the theater. After our tour of Miletus we return to the ship.

Please complete the form below to receive further information about this cruise.

The Royal Caribbean International fleet of cruise ships boasts an amazing variety of thrilling activities, spectacular entertainment, mouth-watering dining, spacious, comfortable accommodation and sailings that take in some of the most incredible destinations in the world. So whether you’re looking for a fun-packed family adventure, a relaxing couple’s retreat or anything in-between, it’s waiting for you onboard one of the Royal Caribbean cruise ships. Royal Caribbean offers guests the latest in cruising luxury and technology for a new and innovative cruising experience that still retains the excitement and sophistication of classic cruising. DAY 1 Seattle, Washington Smell the coffee in[…]